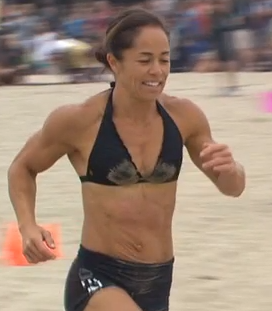 The 2011 CrossFit Games had so many highlights. With spectacular performances from Rick Froning Jr, Josh Bridges and Annie Thorisdottir, it’s hard to choose a moment that stood out the most. However, I will say throughout the event I loved watching Annie Sakamoto.

Those of you who have been involved in the sport for some time probably remember her from the early YouTube videos all those years ago. She was the pint size woman who regularly accomplished superhuman feats of strength and endurance. Annie was the original and quintessential, “Nasty Girl.” She was so synonymous with CrossFit she even had a WOD, “Annie,” named after her.

So when she announced this year she was competing as an individual, I was excited to see how she went. It was a close call and during the Northern Californian Regionals, Annie narrowly secured her position in the 2011 CrossFit Games through a tiebreaker.

When Annie finally made it to the big stage it was amazing to see how well she performed. She finished 9th overall but more importantly, quickly became a crowd favourite. By the end of the Games, her drive, determination and persistent smile, won her the title of the 2011, CrossFit Spirit of the Games award.

It has been a few months since the Games wrapped and I recently found a video with her talking about her 2011 experiences. It is an interesting peak into the mind of one of the pioneers of the sport. So if you have moment check the video out below.