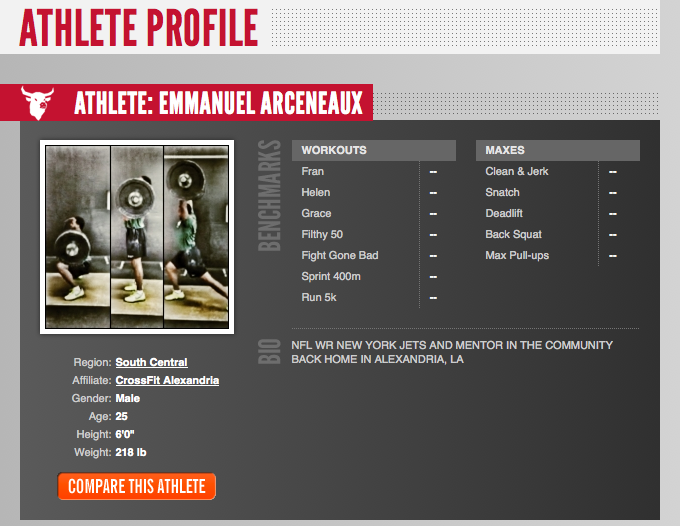 NFL Star Emmanuel Arceneaux Signs Up for the 2013 Open

With the 2013 CrossFit Open just days away, we thought we’d take some time to preview every region taking part this year.

Today we take a closer look at the Australian Region.

There’s no doubt CrossFit is growing rapidly in Australia and New Zealand with a number of world class athletes coming out of the Region in the past few years.

While no competitor from the Australian Region has ever finished on the podium at the CrossFit Games, a handful have made the top ten, most recently Chad Mackay, who placed 9th in the men’s division last year.

The females division is also just as talented in the Australian Region with three athletes finishing in the top 20 over the past two years. In addition, the Region also had a top ten placing in the Team division at last year’s Games.

Here is a look at some of the individuals and teams to keep an eye on in 2013:

While the Region has a number of world class athletes, Chad Mackay is probably the stand out performer after finishing 12th at the 2010 CrossFit Games, and 9th last year. It’s fair to say Mackay will be the one to catch in 2013.

Dual CrossFit Games competitor Rob Forte is also one to look out for. While he finished 35th at the Games last year, he has been one of the most consistent performers on the Regional level for the past few years.

Another one to keep an eye on is three time Games competitor Chris Hogan, who finished 7th at last year’s Regonals.

The women’s division is wide open in the Australian Region with eight different athletes qualifying for the Games over the past three years.

Ruth Anderson-Horrell has been the most consistent performer over that period with two appearances at the CrossFit Games, and a 17th place finish at last year’s event.

Reigning Regional champ Kara Gordon is also expected to be in the mix in 2013 after finishing 19th at the Games last year, as is 2011 Regional champ Amy Dracup after a disappointing performance at last year’s Regionals (7th).

Schwartzs CrossFit Melbourne has been the dominant team in the Australian Region for the past few years, and showed their class last year finishing 8th at the CrossFit Games.

Regional runner-up CrossFit Athletic will also be in the mix this year, as will Tropic Thunder, who finished 30th at the Games in 2012.